If you are having difficulty sighting your target then scopes work best.

But, how do they work and more specifically, “How do thermal scopes work?“ 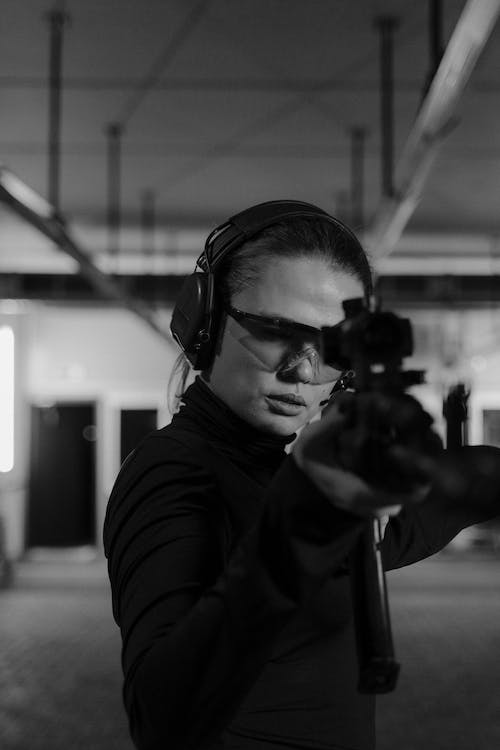 How do Thermal Scopes Work?

What is a Thermal Scope?

Thermal scopes work by using heat-sensitive lenses to see things in low light conditions. Night vision scopes use infrared lights to see objects in dark areas. You can use thermal scopes for hunting or military purposes.

How Do Thermal Imaging Scopes Work?

Infrared spectrums are invisible to the naked eye. Thermal scopes use detectors that focus on thermal-infrared light. A thermogram is created showing the object’s form but related to heat.

A thermogram is a picture of heat patterns. The colors represent different temperatures.

Thermal imaging is a type of night vision used by police officers and other security personnel. It allows them to see things that are normally hidden in dark or foggy areas. Thermal imaging works by detecting the tiny amounts of heat given off by people and objects. This makes it possible to see even when there is no light around.

We’ve got a lot of information here. You might want to read this before buying.

Can IR Scopes be Used in Daylight?

Thermal imaging scopes are great for detecting objects in the dark. They can see through walls, and they can even be used in the daytime. Thermal scopes work well in cold weather, but they won’t work as well in hot weather.

What is an Infrared Hunting Scope?

Night hunting is probably the best use for thermal imaging technology. Thermal scopes are best used for hunting crafty nocturnal animals like pigs and coyotes. Coyotes are smart, fast, have a strong sense of scent, and can detect hunters from a few hundred feet away. Pigs can detect smells from several miles away and deep underground.

Coyotes are beautiful animals that use camouflage to hide from predators. They’re usually found in groups, and they prefer to hunt at night. Their coat helps them blend into their surroundings. Infrared scopes help hunters see better at night.

Thermal imaging scopes use heat signatures as an indicator of what’s going on around them. Resolution is measured by how many pixels there are in the picture, and the refresh rate is how often the camera refreshes the picture. A high refresh rate makes it possible to see faster-moving objects.

Thermal scopes have settings to adjust the colors used to display temperature readings. You can choose between using a rainbow spectrum or a grayscale.

Thermal scopes use batteries. Batteries last longer if you don’t run them too much. You should charge your batteries before using them.

Electro-Optics are expensive devices used by snipers. Some brands offer features such as memory for multiple zeros, range finders, or WiFi connections.

Not Just for Scouting

Night vision technology was first used by the US military during WW2. Starlight scopes were developed during WWII but didn’t become a standard-issue until the Vietnam war. These scopes had a mechanical zero and were heavy. Today’s scopes are much lighter and use thermal imaging instead of starlight. Thermal scopes are much more accurate than starlight scopes.

Use It During the Day

Pulsars are thermal imagers that use heat instead of light. You can see things even when it’s dark out because they use infrared light. These devices are great for nighttime hunting since you won’t need any other equipment besides this device.

Pros and Cons of Thermal Scopes

Night vision scopes are light and inexpensive. You can buy them in different models and generations. You can choose one according to your needs. A basic night vision scope is enough for beginners. For pros, you can get a higher-end model.

Specs to look for when choosing a thermal scope

Thermal imagers are used by many people, but they’re expensive. You should be careful when buying one because you might end up paying too much. You should also consider what kind of images you want to capture before choosing a model.

Resolution of the scope and sensor

The more expensive the equipment, the better the result. The price of the device does not determine the quality of the reading.

A very high-quality thermal sight will allow you to positively ID the target at up to four thousand yards, while an entry-level scope can limit you to one thousand yards or less. A large lens and a narrow field of view will give you a better range than a small lens and wide field of view.

Thermal imagers work by detecting differences in temperature. But, this doesn’t mean that the thermal imager can see everything. There are other factors that affect how far away something can be seen. Size and contrast are two important factors.

Thermal scopes are used for hunting at night. A four-line reticle is most useful for targeting. Thermal scopes usually use a bracket attached to a weapon. There are different sighting profiles available as well. Monoculars are more reliable than binoculars.

As a general rule of thumb the more frequently a scope refrains from refreshing the scene, the less clearly you will be able to detect any movement in the scene. Here everything is simple and clear as in PC games, the faster you get information, the higher your frame rate. The standard range of frame rates is 7.5 to 59 Hz. If you’re in the mood for thoughtful observation of the territory, then you can save money and do without a high-range device. If your goal in life is active and dynamic hunting then your choice is at least 29 Hz.

A good quality thermal scope may last up to 8 hours after a single battery charge. Battery life depends on how long you use the scope. You should check the manufacturer’s specifications before buying.

Batteries should be replaced every two years. A reliable manufacturer won’t put a faulty battery into his product. High-quality batteries give hours of battery life.

Thermal riflescopes are expensive, so you should pay close attention to the warranty length because you want to make sure that you’re getting the most out of your investment. You need to buy a thermal scope from a reliable manufacturer who shares the responsibility and service of their products with third parties.

Customer service is very important when buying a new device. You should learn about forums and advice from friends before making any purchase. There is no other tool for an objective assessment. When you buy your first device, you should choose the best manufacturer for yourself.

Thermal imagers are used by military forces to detect heat signatures. You can mount them on your helmet or weapon rail. There are other types of thermal imagers available as well.

Thermal imaging devices are very expensive and require lots of maintenance. You should buy them when you need them, because if you do not use them often, they may stop working. Also, make sure you get a remote control, extra batteries, interchangeable lens, cover, case, and other accessories.

What does a thermal scope do?

Can you use a thermal scope during the day?

Thermal scopes work better in hot weather than in cold weather. A thermal scope can see things even when it’s very hot.

How much is a thermal scope?

Is Thermal better than night vision?

Thermal imaging is usually used by hunters who want to see what is going on around them without being seen themselves. This is useful for stalking prey or watching out for predators. Thermal cameras are also useful for detecting people who may be hiding in bushes or other places.

Should you buy a cheap thermal scope?

Thermal cameras can be expensive. You shouldn’t buy a cheap one if you’re going to use it for surveillance. Older models might be cheaper, but they won’t last as long. A good camera should cost more than $2,000.00.

Hopefully, in the next 10 years, prices will drop far less. They have dropped thousands over the past decade. Maybe by the time the end of the next decade, a thousand-dollar thermal rifle scope will be available that is actually worth buying. Best Thermal Rifle Scope – Updated 1 Pulsar Core RX Q30 V Thermal Riflescope – Check Price on Amazon The pulsar core RX q30 v has everything that you need a thermal scope to have! No sacrifices are needed here, making it one of the best thermals on the market.

Thermal scopes perform flawlessly from -13 degrees Fahrenheit to 122 degrees Fahrenheit. They have a frost-resistant AMOLED display giving you a crystal clear image even when looking through the lens while being used in extremely cold weather. The scope has a normal 1.6 magnification with magnifications up to 6.4 x. It also includes 2 x, 3 x, 4 x digital zoom and a graduated scale to give you the most optimum field of view possible.

Digital zoom can be problematic because it takes an image of your target through the viewfinder and magnifies it. However, most thermal scopes use digital zooming. A great feature of this thermal scope is the ability to see both the white-hot and black hot images simultaneously. This allows you to see what you’re shooting without having to take your eye off the scope.

Conclusion and Things to Remember…

You should do your research before buying a thermal imaging device. These devices are able to view the target in complete darkness. There is a wide range of models available in the market. These devices work even in rough conditions. Thermal optics will work in an environment that is utterly dark to the human eye, so long as there is some thermal energy being emitted.

Some thermal scopes have multiple modes to display heat signatures in various colors Thermal scopes are built to see in the heat spectrum of light, thus, when you point it at a source of heat, that heat source will glow. This adds another layer to our hunting experience.

A night vision scope provides a more realistic view of the environment, complete with depth perception. Their level of accuracy is impeccable. So if you are investing in a precision thermal sighting system you should invest in a quality piece.

Thermal scopes are used for hunting animals such as deer, elk, and bears. They can be mounted on rifles, handguns, or crossbows. The scope has an infrared light source that illuminates the area around the hunter. This allows him to see better at night and in poor visibility conditions.

Unlike the use of laser targeting or near-infrared illumination to augment Night Vision equipment, the X22 thermal imaging weapon sight is extremely difficult to detect with other devices, as it emits no visible light or RF energy.